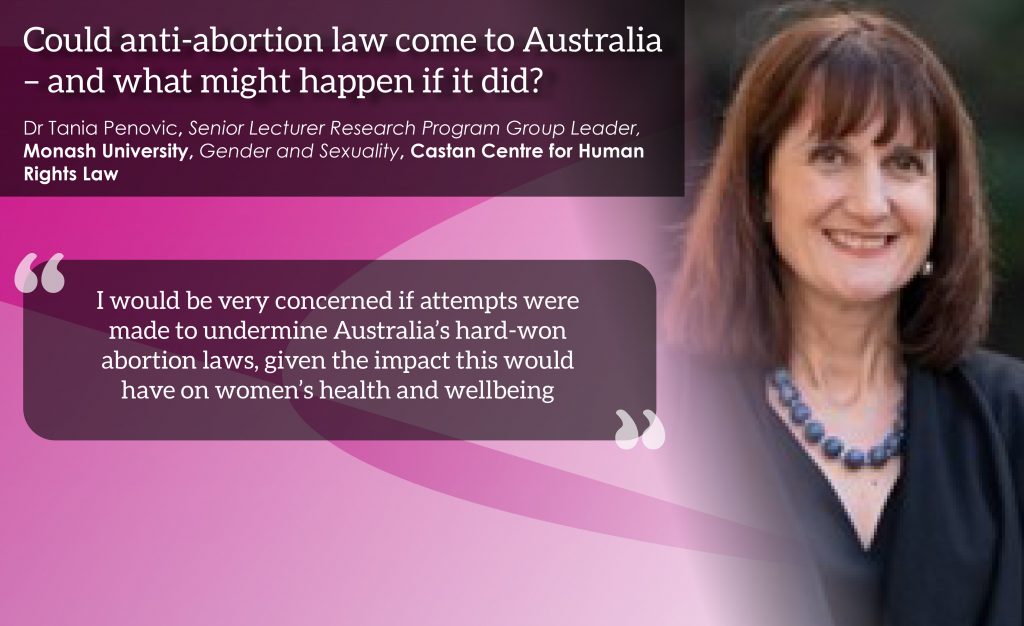 11 JulCould anti-abortion law come to Australia – and what might happen if it did?

The US Supreme Court’s overturning of Roe v Wade has had an immediate effect on abortion access in the United States, with the criminalisation of abortion in some states taking effect within hours of the court’s ruling.

The ruling and its consequences have set off alarm bells worldwide, including Australia, where a series of protests have taken place in recent weeks, expressing outrage and solidarity with protesters in the US.

While most Australian jurisdictions have now decriminalised abortion, some abortion-related offences remain. In Western Australia, for example, an abortion may only be performed after twenty weeks of gestation if two medical practitioners from a panel of six agree that the foetus or pregnant person has a serious medical condition.

Dr Tania Penovic, a Senior Lecturer at Monash University and Research Program Leader (Gender and Sexuality) at the Castan Centre for Human Rights Law, is concerned about the emboldening of the global anti-abortion movement and its potential implications for Australia.

“Developments in the United States show the vulnerability of reproductive rights and in Australia we are not immune from the same influences. Australians should not underestimate the significant influence than can be exercised by anti-abortionists,” she said ahead of the Obstetric Malpractice Conference, hosted by Informa Connect.

“There are important differences between the US and Australia’s legal framework – the decision to terminate a pregnancy is not grounded in our constitution and we lack a federal bill of rights which could operate to facilitate access to reproductive healthcare. However, the US Supreme Court’s decision to overturn Roe demonstrates that hard-fought rights can be erased. Moreover, religious actors and ideologies are taking up an increasing amount of oxygen in the abortion debate – and parliament more generally.

“I would be very concerned if attempts were made to undermine Australia’s hard-won abortion laws, given the impact this would have on women’s health and wellbeing,” she added.

There are countless examples of the impact of criminal laws on healthcare access, with many now emerging from the United States. A prominent example is the case of 31 year old dentist, Savita Halappanavar whose preventable death at Galway University Hospital in 2012 galvanised calls for decriminalisation and led to the repeal of the Eighth Amendment to Ireland’s Constitution.

Halappanavar was admitted to hospital while experiencing a miscarriage and was denied a life-saving abortion because Irish law prohibited abortion in circumstances where a heartbeat could be detected.

The data agrees, with only ten percent of Australian GPs registered to prescribe mifepristone, with numbers as low as 1% in rural, regional and remote area. Moreover, doctors are deterred from providing abortion services over fears they will lose respect from peers in the medical field and the broader community. One regional obstetrician and gynaecologist described the situation to Dr Penovic in the following terms:

“In every country town it’s a major problem because some have one or two doctors who could be deeply religious and won’t provide contraception. They definitely won’t refer for a termination. So the country situation is very critical…There is a real problem in the country with women accessing proper women’s health reproductive advice. The doctors put off training in this area because of the personal attacks that happen, the attacks to your family. You’re putting yourself out there if you support terminations.”

Dr Penovic notes, “Stigma doesn’t just evaporate when the law decriminalises abortion. While our laws are currently in a much better space than the US, there are still issues of access because of that residual stigma.”

A further consequence of criminalising abortion is the scrutiny that it invites over pregnancy. Pregnant people may be scrutinised with respect to their substance use or medical decision-making during pregnancy. Where miscarriage or stillbirth occur, women have been subjected to criminal investigation and sometimes charged with homicide. In the United States, even before the overturning of Roe v Wade, women have been sentenced for aggravated homicide after suffering miscarriage.

In El Salvador, where abortion has been a criminal offence for decades, there are numerous cases of women experiencing prosecution and criminal conviction for up to 40 years following miscarriage.

“The criminalisation of abortion renders women’s bodies a site of scrutiny and surveillance and denies fundamental human rights, such as the right to privacy, healthcare, non-discrimination and freedom from cruel, inhuman and degrading treatment,” Dr. Penovic said.

Medical experts should be heard

In light of these concerns, Dr Penovic urges law makers to ensure the voices of medical experts are not “drowned out by religious actors”.

“Doctors, nurses and, social workers – people who work in this area – should be listened to and not sidelined by the increasingly loud voices of religious rights,” she said.

Hear more from Dr Tania Penovic at the Obstetric Malpractice Conference, hosted by Informa Connect. This year’s event will be held 13-14 September at the Rendezvous Hotel, Melbourne. Learn more and register.